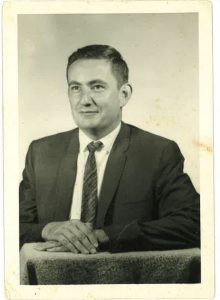 Great things are happening in the city of Sharpsburg! Thanks to a bequest from lifelong resident Robert L. Brown, this small city in Bath County is being transformed.

Robert, whose family has lived in Sharpsburg for many generations, left an incredibly generous gift through his estate to establish the R. L. Brown Foundation. Blue Grass Community Foundation has been entrusted to carry out Robert’s wishes to improve the quality of life for the residents of his hometown.

Born in Sharpsburg in 1933, Robert attended the local elementary and high school, then earned a degree in business administration from the University of Kentucky in 1954. After he spent two years stationed in France as a U.S. Army medic, he returned to the States to embark on a 47-year career with Woolworth’s, frequently traveling between Cincinnati, Louisville and Detroit.

After Woolworth’s closed in the late 1990s, Robert returned to Sharpsburg permanently and managed the Brown General Store with his sister, Geneva. He followed family tradition and took pride in his business acumen and financial savvy.

“He was brilliant at investing,” said Rob Lane, friend and executor of Robert’s estate. Rob Lane has worked closely with the Community Foundation to ensure the Browns’ family legacy lives on for generations. “Mr. Brown’s gift has planted the seeds for the perpetual funding of groundbreaking projects in Sharpsburg,” said Lane.

The updates Sharpsburg continues to see are significant. To date, Robert’s bequest has completely refurbished the downtown Sharpsburg playground and has extended the summer hours and programs at the Sharpsburg Branch of the Bath County Memorial Library. The gift has made it possible for local youth to attend the Bath County 4-H Summer Camp and has brought Lexington Children’s Theatre and the International Book Project to town for free summer camp workshops.

The elementary and high school Robert once attended, the same in which Geneva taught hundreds of Sharpsburg children — including Rob Lane — is now the Sharpsburg Community Center. Robert’s gift made possible considerable improvements to the building the Brown family loved so much. Likewise, a new chapel at the Crown Hill Cemetery on Main Street has been constructed.
And that’s just the beginning.

Blue Grass Community Foundation is partnering with the University of Kentucky to open and staff the Sharpsburg Design Studio, which will be located on-site in Sharpsburg. The studio will collaborate with residents to generate ideas and identify key priorities to further revitalize the downtown area, improve the local park, provide youth programs, and enhance the quality of life in Sharpsburg for everyone.

“Robert’s legacy is a testament to his love for his community,” said Lisa Adkins, president and CEO of the Community Foundation. “We are so honored to be entrusted with that legacy, ensuring that charitable aspirations for Sharpsburg are realized.”

To learn how you can leave a meaningful legacy for your community, contact Halee Cunningham, General Counsel and Director/Planned Giving, at [email protected] or 859.225.3343.